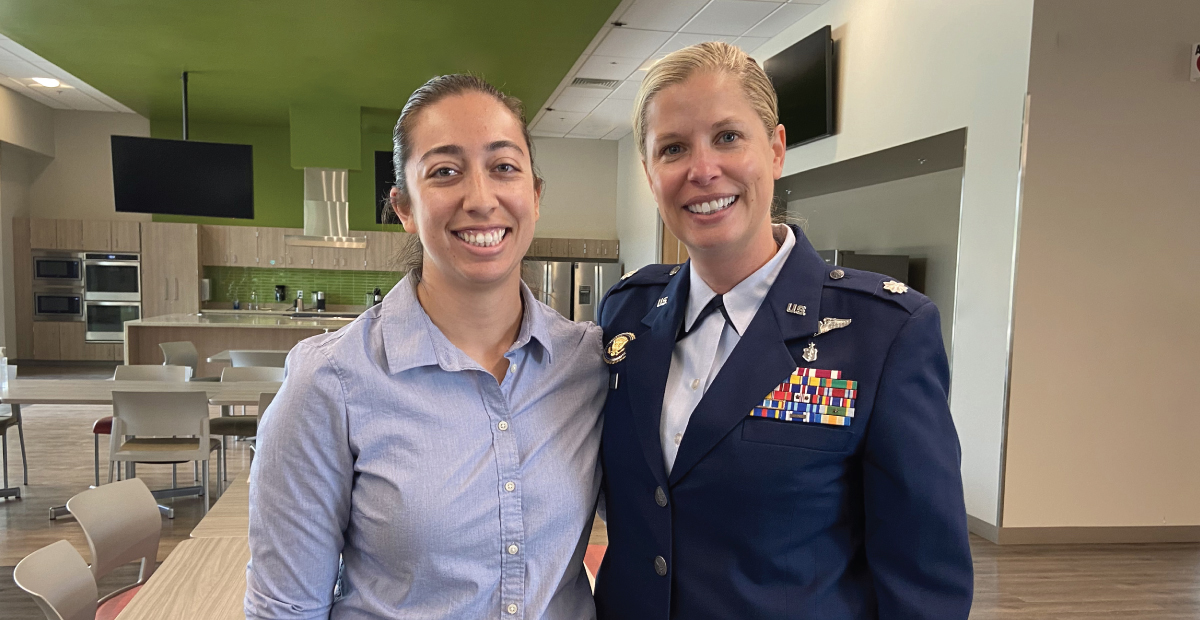 Chelsey Preciado, first year medical student, was commissioned into the U.S. Air Force on campus on Tuesday, April 19. Preciado will enter the U.S. Air Force as a commissioned officer after she completes her medical education at the California Health Sciences University College of Osteopathic Medicine (CHSU-COM). She hopes to specialize in emergency medicine, particularly studying the effect that altitude has on the health of airmen.

By joining the U.S. Air Force, Preciado is following in her grandfather’s footsteps and finishing something her mom has always wanted to do.

At the age of 18, Preciado’s mother took the Armed Services Vocational Aptitude Battery (ASVAB), a test evaluating an individual’s occupational success in the military, but never received the results until years later when her grandmother shared that she intercepted them. Preciado wanted to bring it full circle to finish what her mother had started. Preciado also has several family and friends who are currently serving in the military.

Originally from Southern California, Preciado moved to Hawaii with her mother where she had many opportunities to interact with veterans and military personnel in a clinical setting.

While working at an orthopedic clinic in Kaneohe, HI, she saw firsthand the effects that the job can have on the body. Hawaii is home to several military bases encompassing all branches except for the U.S. Space Force. Preciado saw many veterans who came to the clinic for specialty surgeries, like shoulder and knee replacements, because the nearby military hospitals didn’t have enough of those kinds of specialty surgeons. She believes joining the U.S. Air Force will allow her to continue helping the veteran population.

“You get to serve a population that really needs it and sometimes gets overlooked,” said Preciado. “I know the veteran population because a lot of my family suffer from PTSD after their military service and in the Hawaii clinic, a lot of our patients were military. It made me realize that they really are part of the underserved population, and this is where I could help.”

Preciado’s commissioning ceremony represents the beginning of her military journey, taking the Oath of Office to signify her commitment to supporting and defending the Constitution of the United States and discharging the duties of the office. It must be administered by an active or reserve commissioned officer.

JoAnna Jackson, DO, Chair of Specialty Medicine at CHSU-COM and U.S. Air Force reservist and veteran administered the Oath of Office at a small gathering on campus. Several friends and classmates from the Student Chapter of the Military Association of Osteopathic Physicians and Surgeons (SAMOPS) observed the small ceremony.

Preciado is one of ten CHSU-COM students who have been commissioned into the U.S. military.